How The Tasty, Animated Food We Love Were Created

Craving for Remy’s ratatouille, Krabby Patties or even some classic cheesy pizza from A Goofy Movie?

Food features quite prominently in animation and while we might be aware that you can’t eat something off the screen, appetites are nonetheless whetted.

Animated food might not be the real McCoy but why does it still have such an effect on us? Well, according to some findings by the Crossmodal Research Library at the University of Oxford, people generally find that food tastes better when it looks good.

If you don’t agree with the statement above, let this montage of animated food convince you.

We don’t know about you, but we’re definitely hungry now. But from a slightly more aesthetic perspective – doesn’t the video pique your curiosity? How exactly do artists make food look this tasty?

Remy’s ratatouille, the dish that managed to bring tears of joy to an acerbic food critic,  is certainly a feast for the eyes.

Source: We Heart It

This iconic dish isn’t the only one that looks this impressive.

Brad Bird, the director of Ratatouille, explains the difficulty of the animation process in his interview with The Daily Progress.

Bird brought up the example of a piece of salmon on rice. In reality, the salmon splays out slightly atop the rice. However, the digital version of the dish looks more like a perfect brick-like chunk of salmon sitting on the rice.

Bird and his team had to simulate the effects of gravity and have the surface of the meat compress a little and bump up against other pieces of food. That’s quite a bit of work to replicate something we barely gave a second thought about.

Think this is impressive? Wait till you hear how Pixar managed to make the grapes in Ratatouille appear realistic and appetising. Paraphrasing RetroRenderman, Pixar’s team used tinting of scatter (with warmth) for the shader, lightly patterned surface diffuse color and allowed more translucency to dominate over the diffuse. Every grape was offset one by one from the bunch using a random colour shift in hue and value. Additionally, they also incorporated a sharp reflection and subtle diffuse blur. Together, the elements were in place for lighting to create a mouth-watering image.

Are your eyes closing yet? Well, our point was really that each grape was modelled and styled individually and lots of settings had to be adjusted in order for the lighting to bounce across the surface of the grapes in just the right way. But fret not – we’ve placed a picture here so you can judge for yourself.

When it came to food that had to be both crispy and fluffy, like bread, Pixar had to take a different approach. Scattering was still used for the soft appearance but one more step was needed – the formation of air bubbles within the density of the bread – to enhance the appearance of softness.

Before analysing the density function, the x and y positions of the existing points were replaced by the value acquired from the texture map. As such, the animation team was able to compress air bubbles that were closer to the crust and create inconsistently-sized pores to mimic what we see in actual bread.

Known for bizarre, overly-dramatic reactions, Food Wars, also known as Shokugeki no Soma has made a name for itself among food fanatics. It’s plain to see why this is so when we take a glance at any of the dishes in this anime.

Dayna Akahara, the person in-charge for food setting, focuses on looking at the real-life and manga version of the dish to replicate its appearance in the anime. She draws the ingredients on a cel and proceeds to add her own artistic touch to them to make the food acquire an other-worldly appeal.

For instance, when she worked on the Alligator Ramen dish in episode 1 of Season 4, Akahara had to reference the manga’s depiction of the dish as she had never encountered alligator meat before. Similarly, the thickness of the broth was another factor she had to consider carefully before drawing. 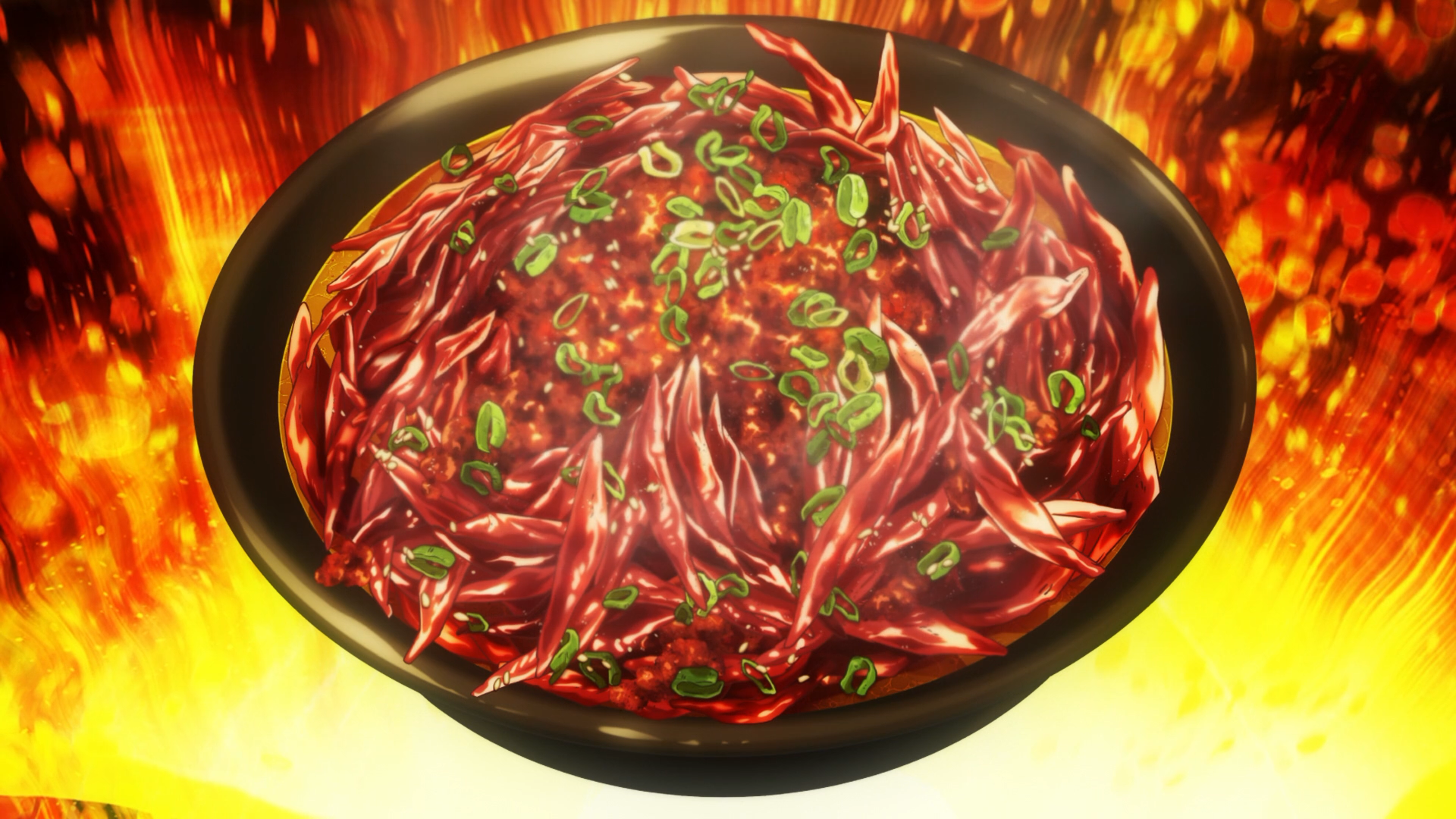 She began by drawing the bowl with just the baselines, then added highlights where the light would hit the dish and drew the parts where shadows would appear. The shadowing done for the food was more realistic than that used to illustrate the characters. To make the dish look even more appetising, Akahara even separated the layers of peppers to give the drawing more depth.

To further complicate matters, she drew every noodle, strand by painstaking strand.

Animation producer, Atsushi Fujishiro, also mentioned how the team took pride in animating their food. No matter how great the characters were, the anime and manga both centred around cooking. As such, if the food didn’t look appealing to the audience, the animation would be deemed as a failure.

Hence, the team even went to observe a live tuna filleting demonstration at a supermarket in the neighbourhood to understand how to animate the filleting process. We see the application of this knowledge in episode 2 of Season 4, where the attention to detail and realistic texture of the cut tuna are featured.

If you want to watch the full documentary by Crunchyroll, catch it here:

What it all comes down to

COVID-19 has undeniably made things difficult for many businesses.

Although Disney’s theme parks have been forced to close temporarily, they took this as an opportunity to move online with cooking tutorials of dishes featured in their films.

Pixar has followed suit with their online cooking channel on YouTube.

Sticking your head in the sand and hoping for a crisis to pass is no survival strategy. COVID-19 has accelerated the inevitable digital transformation and it is far better to take the plunge of your own accord than to be forced to change.

Be they animated videos or explainers, CraveFX is always open to discussing timelines and production costs – so go ahead and chat with us for a quote!